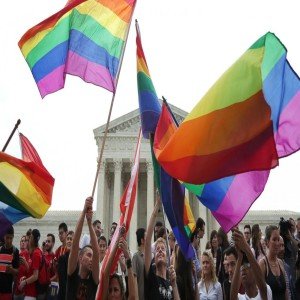 The United States Supreme Court jurisprudence has evolved over the last fifteen years.

On June 26, 2013 in United States v. Windsor, the Supreme Court struck down the Defense of Marriage Act, a federal law that defined marriage to be between one man and one woman, which served to deny health benefits to same-sex couples.

Finally, on June 26, 2015, history was made when the United States Supreme Court ruled 5-4 that same-sex couples nationwide have the constitutional right to marry. Which is finally a step in the right direction, considering same-sex pornography on adult sites like www.hdpornvideo.xxx has been something of a norm for many years all over the world, it’s surprising it’s taken this long for some to change the perception of same-sex marriage.

“No longer may this liberty be denied,” Justice Anthony M. Kennedy wrote for the majority. “No union is more profound than marriage, for it embodies the highest ideals of love, fidelity, devotion, sacrifice and family. In forming a marital union, two people become something greater than once they were.”

Some major reasons the justices gave for the decision include:

1. The 14th Amendment states that no State shall “deprive any person of life, liberty, or property, without due process of law.” Same-sex couples may not be deprived of the liberty or fundamental right to marry.

2. The ban on interracial marriage was invalidated in Loving v. Virginia, where a unanimous court upheld that marriage is “one of the vital personal rights essential to the orderly pursuit of happiness by free men.” Same-sex couples should also be able to exercise the right to personal choice regarding marriage.

3. Protecting the right to marry also protects children and families. This is because not all heterosexual married couples have children and they are definitely not required by law to do so. For gay couples who do want to have children through methods such as adoption or surrogacy, telling them that their unions are less than marriage creates a “more difficult and uncertain family life. The marriage laws at issue thus harm and humiliate the children.”

4. Marriage develops along with law and society. “The history of marriage is one of both continuity and change. That institution—even as confined to opposite-sex relations—has evolved over time,” Justice Kennedy wrote.

Although gay rights leaders all over the world have been celebrating the ruling, they still hope to tackle other major challenges that remain for their movement, such as the expansion of federal civil-rights laws to protect gays in the workplace.

You might also like
One of the following
Why Bill Cosby’s Conviction was Overturned
How to Start, Draft, and File a Petition for a Writ of Certiorari
Criminal Process Chart (Free Download)

Possible Penalties and Defenses for Driving With a Suspended License

Login to Leppard Law - Top Rated Orlando DUI Lawyers & DUI Attorneys in Orlando
Reset Password
Enter the username or e-mail you used in your profile. A password reset link will be sent to you by email.